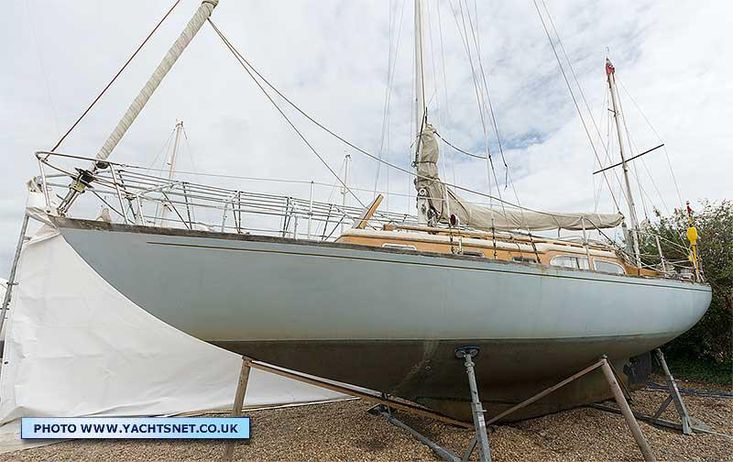 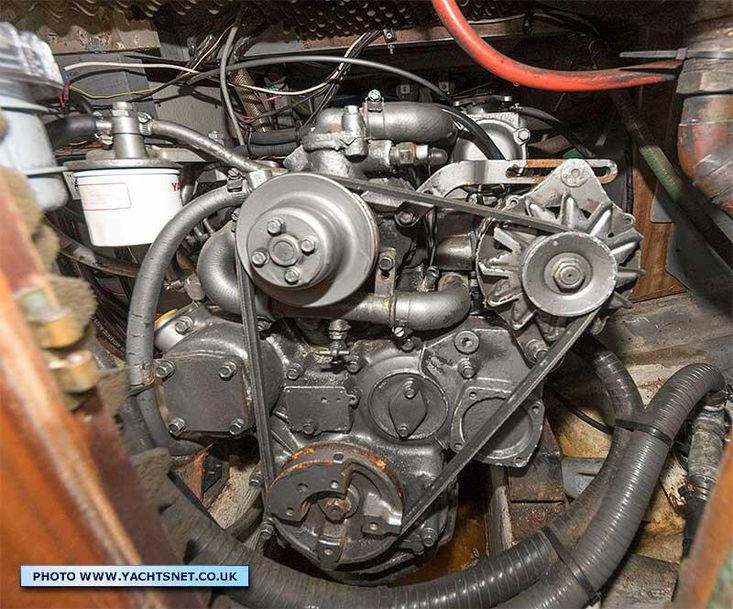 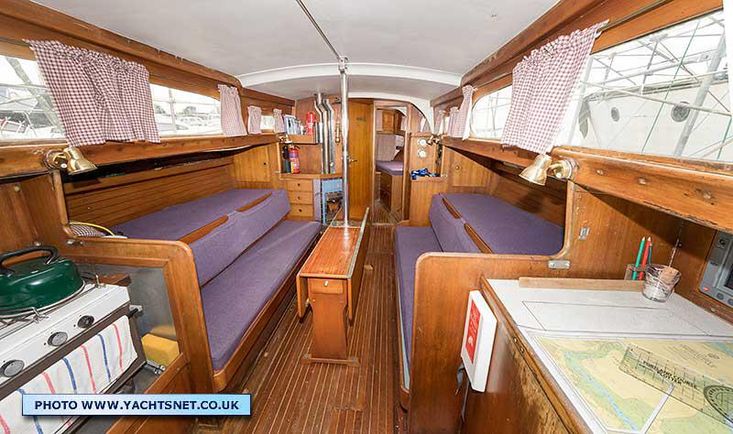 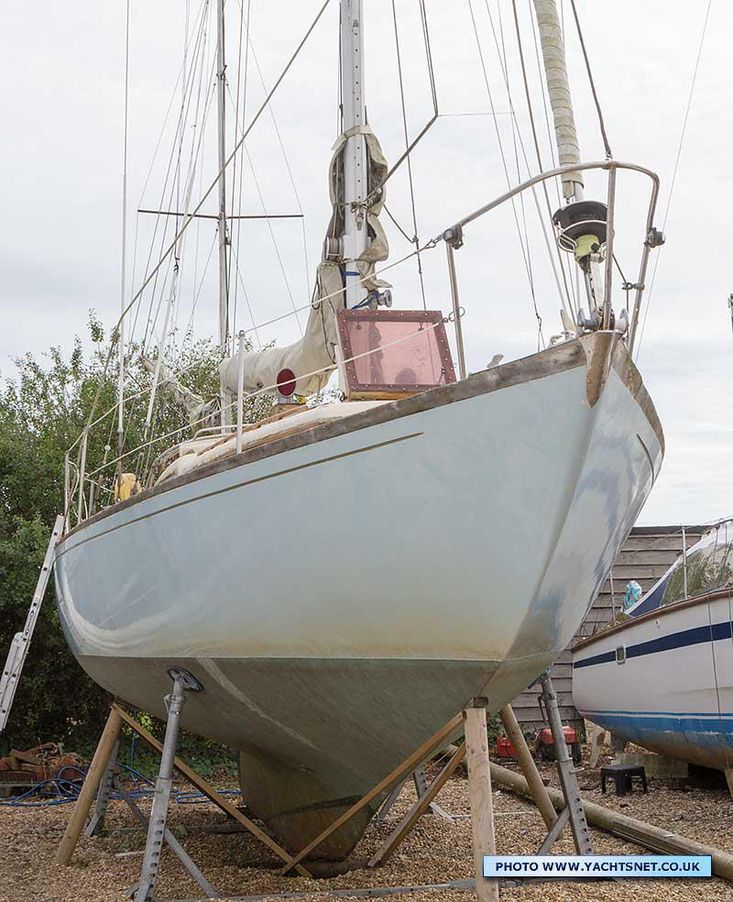 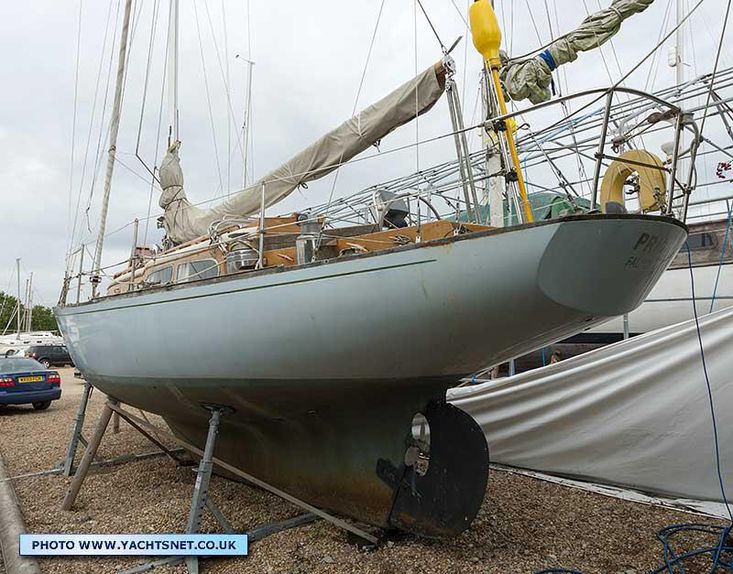 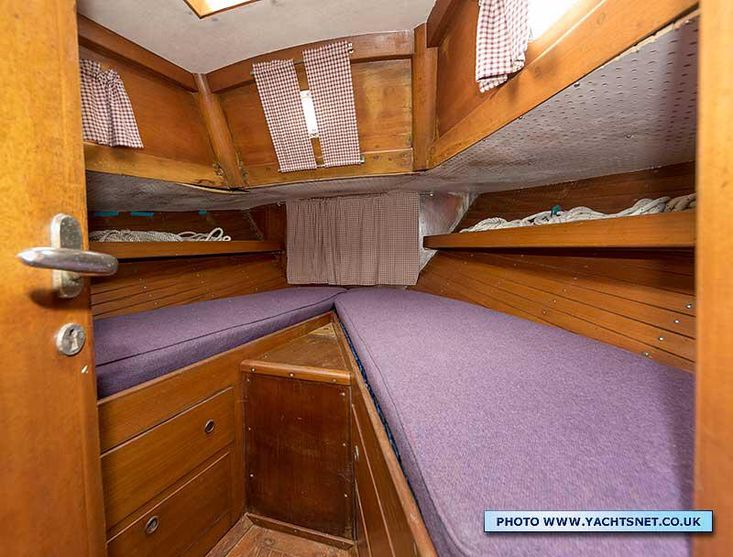 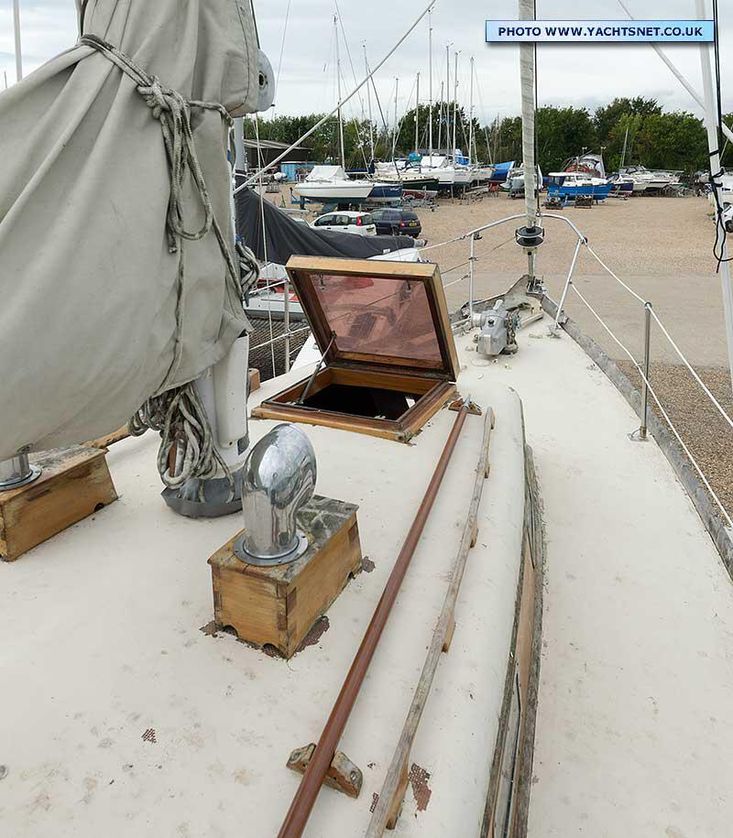 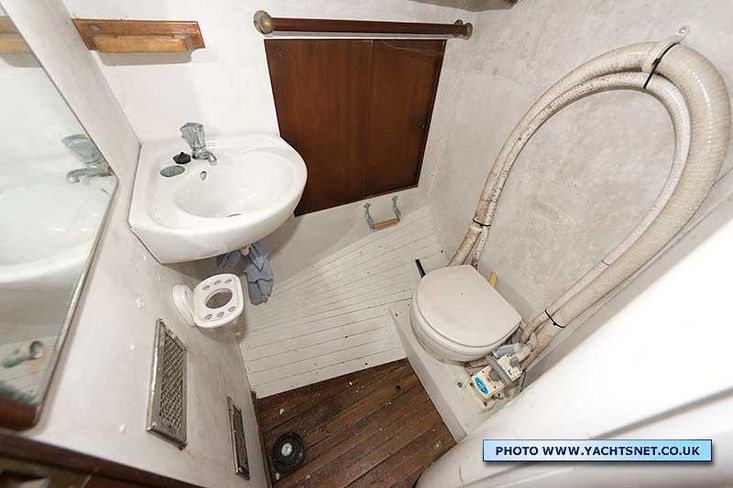 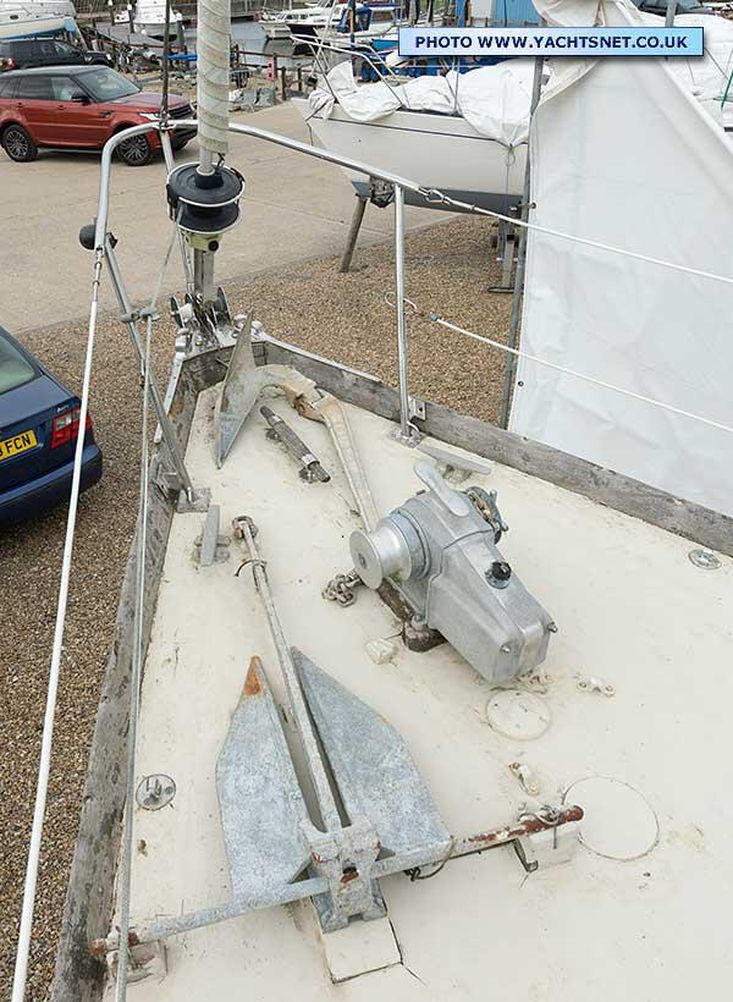 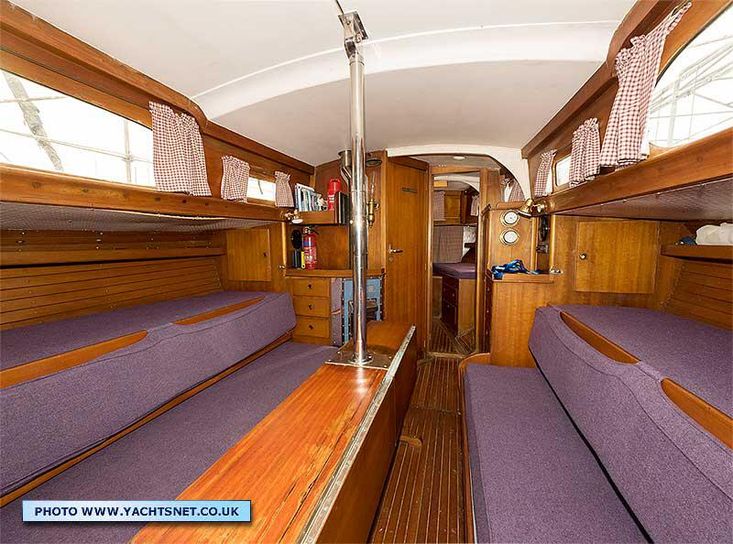 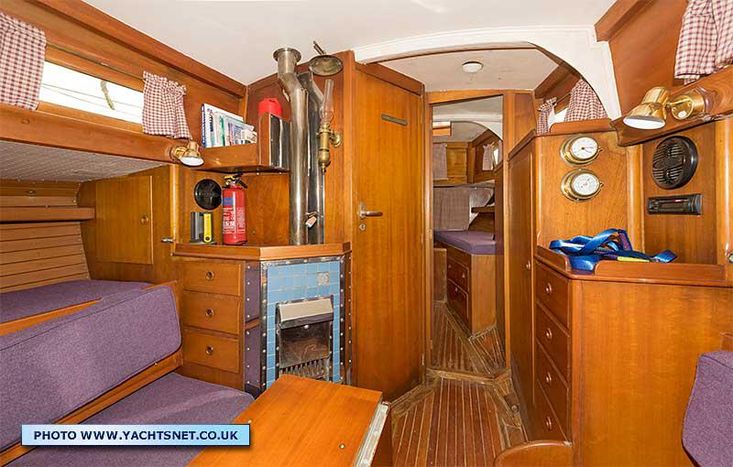 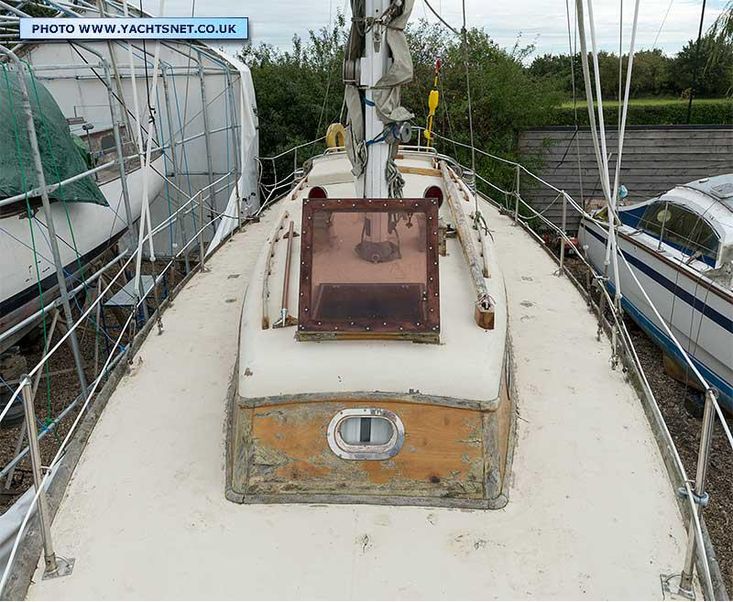 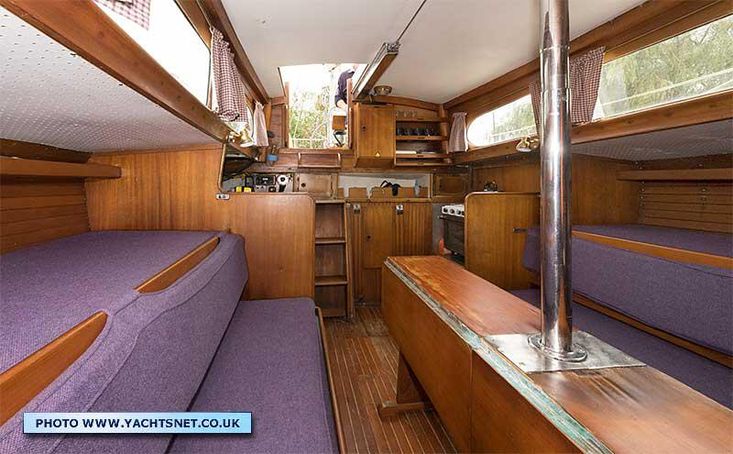 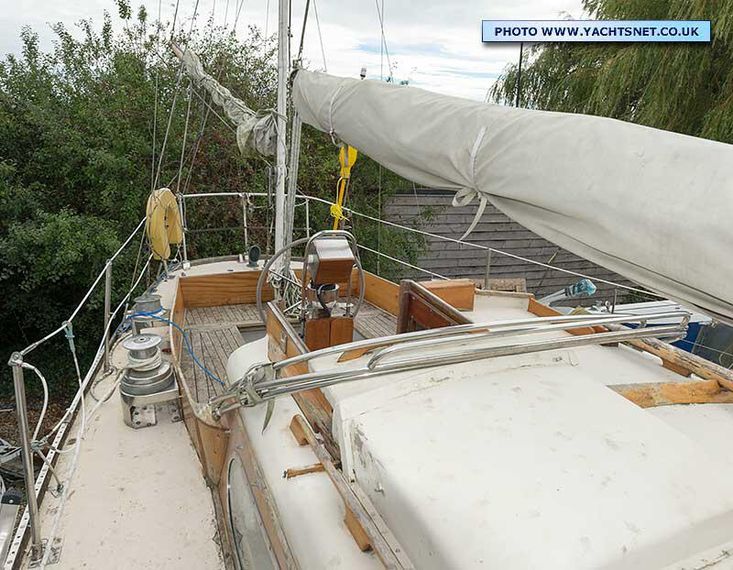 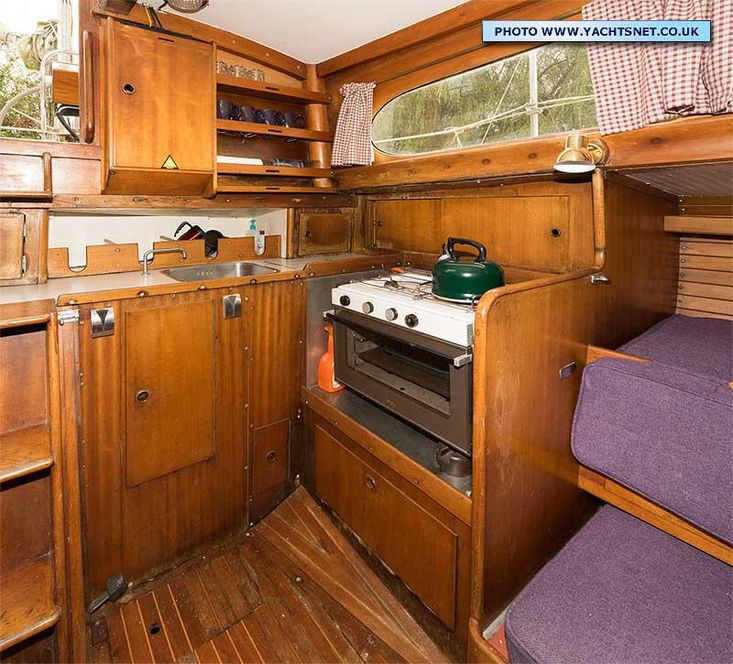 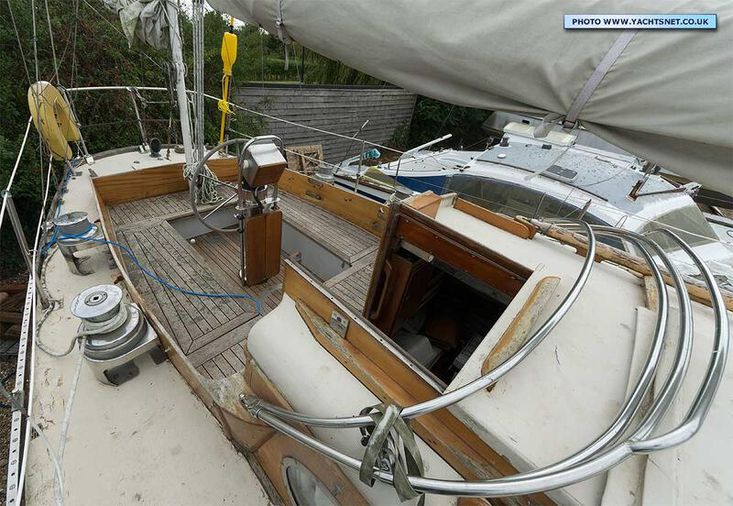 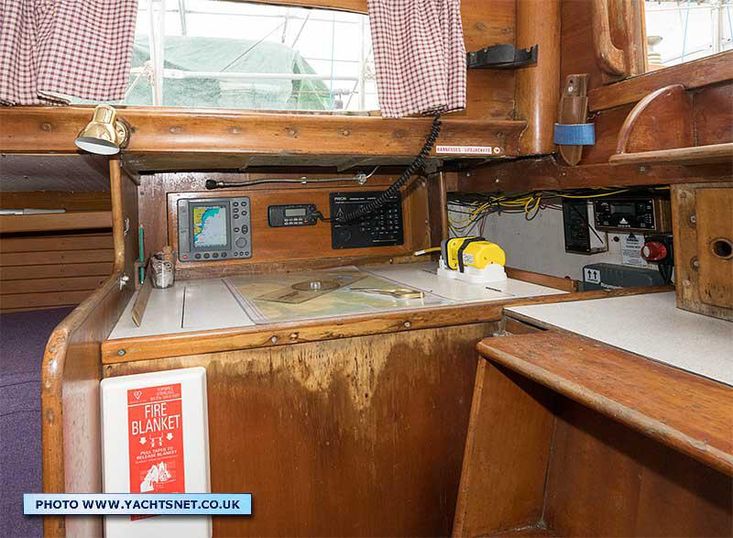 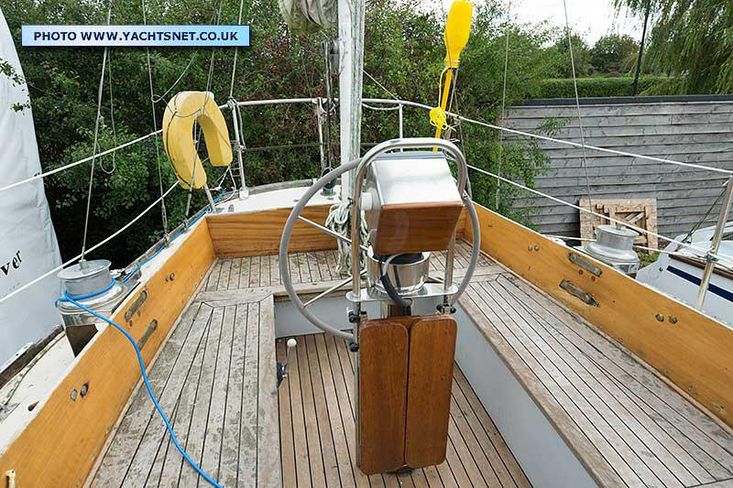 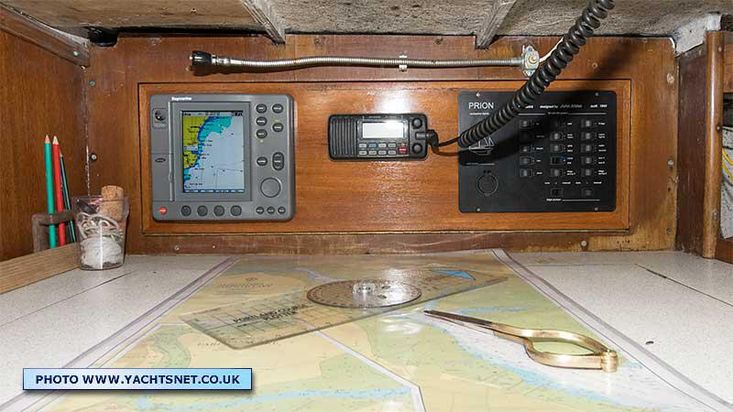 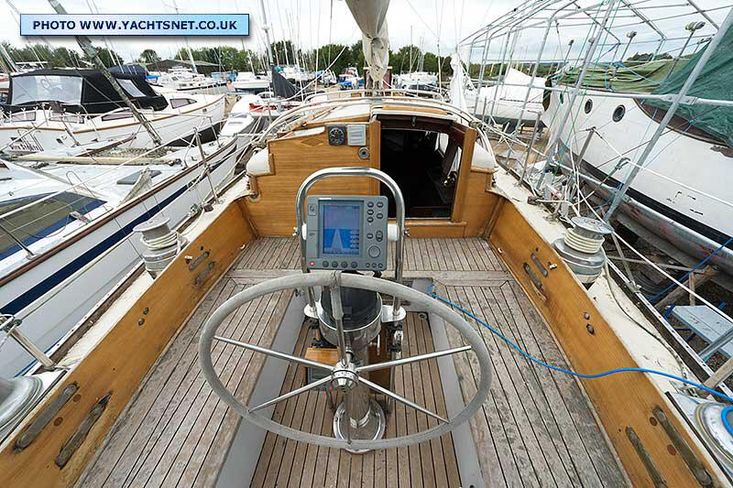 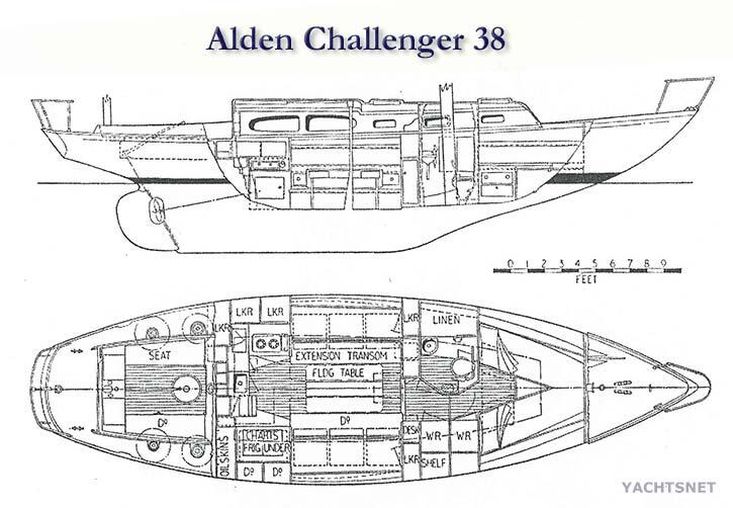 The Alden Challenger 38 was designed by John G. Alden shortly before he retired in 1956. It is one of the last designs John Alden designed personally just before he retired in 1956. A few were built in timber before the hulls and decks were moulded in GRP by Halmatic, and fitted out by quite a number of yachtbuilders in the USA and Europe. About 50 in total of the GRP-hulled boats were built. Being an American design she is beamier and hence more spacious than many British yachts of similar age, and has a centreboard as well as a full long keel.

We sold this yacht to the present owner in 2013, and the 2013 survey revealed rot in the timber structure under the cockpit sole. The hull and deck are GRP but the cockpit structure and coachroof are timber. The present owner had extensive work done on the yacht - a list of which is available. He has however been unable to keep up the maintenance of the brightwork, and she now needs quite a lot of external cosmetic work.
Coachroof

This is a seriously pretty genuine classic, with (unusually) a GRP hull and deck. She now needs a new owner who will give her the love she needs - most of all some paint and varnish.

The first GRP boat to be built in Europe was in 1952, an Uffa Fox design moulded by Halmatic, the GRP material being glass matt fibres with Crystic polyester resin - the director of Halmatic Patrick de Lazlo named this new material 'Deborine' after his wife Deborah. By 1960 Halmatic was one of the major builders of GRP yachts and to this day although now taken over by Vosper Thornycroft still build high quality GRP hulls, though the 'Deborine' material name did not last long.

Born in 1884, John G. Alden founded his yacht design office in 1909 after serving an apprenticeship with Starling Burgess. The design office closed whilst he served in the army during the First World War, but his name was made when his 'Malabar' design won the 600 mile Newport-Bermuda race in 1923, 1926, and 1932, all with Alden at the helm. In 1932, all four top finishers were Alden designs. John Alden himself retired in 1956, by which time his design office had a workforce of 90. The John G. Alden collection of designs is now in MIT's Hart Nautical Collection.

The builder of this yacht for sale was LeComte-Holland, N.V., a company set up in 1954, with premises in Jutphaas in Holland and New Rochelle in New York, USA. They built a number of Alden designs under license, originally in wood, but later switching to composite and then all-fibreglass construction, with very high quality timber interiors. LeCompte closed down building yachts in 1994.

The particulars detailed herein are intended to give a fair description of the vessel but their accuracy cannot be guaranteed. These particulars are not a part of any contract or offer, and are supplied on the understanding that all negotiations shall be conducted via Yachtsnet Ltd., who are acting as brokers for the vendor. The vendor is not selling in the course of business unless otherwise stated. The prospective purchaser is strongly recommended to check the particulars, and where appropriate, at his own expense, to employ qualified agents to carry out surveys, structural and/or mechanical & electrical checks or tests.

Boats for sale
by continent

Boats for sale
by country